Mike Powell has flown the world as cabin crew, trained to be a catholic priest, worked in prisons, borstals, parishes, schools and delivered laundry for a dry cleaners.

He currently reads the news on Europe’s most successful national radio station, BBC Radio 2 alongside 6 Music and 5 Live. He also writes and reads news bulletins for Global Radio’s national brands…Classic FM, Smooth, Gold and LBC from their London headquarters. He also reports and presents for the BBC World Service…

…Mike started though on hospital radio at the age of 12 although he wasn’t allowed on air as his voice hadn’t broken. But he started reading the news at his Mum’s dressing table at the age of 8, presenting the weather in the bathroom at 9 and was writing to ITV and the BBC at 10 asking for a job. He had 9 auditions to be Phillip Schofield’s replacement in the Broom Cupboard on CBBC, and presented a radio show on Radio Luxembourg at the age of 17.

Also at 17 he joined a national girls’ magazine as sub-editor. Within a year the publishers asked him to become a reporter for the launch of a new music paper.

He wrote three weekly columns and reviewed concerts and records. Among those he interviewed were John Travolta, the Beach Boys and Suzi Quatro. That gives you an idea of when….

At British Airways he not only flew the world – white water rafting in New Zealand and being kept under house arrest during the Bangkok riots – but also recruited and trained crew. He also produced and fronted a 2.5 hour corporate video sent to all new recruits. He led a team to totally revamp new entrant training which saved the airline millions and was then sold to many external blue chip companies.

The media bug then caught him again when he presented TV/Radio weather for the BBC from 1998. 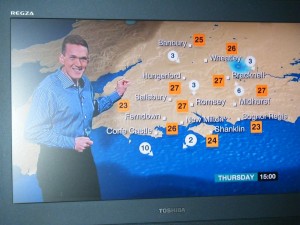 That led to reading the news for Radio 5 Live, hosting a wide range of radio programmes for the BBC, reporting for Radio 4 and becoming a tv presenter/reporter for TV including BBC World.

BBC One report for Watchdog

Expose for Inside Out

Mike’s love of the bizarre was showcased in his regular Sunday radio show on BBC Sussex, BBC Surrey and BBC Radio Solent for 9 years.

Maybe it was his ordination as a catholic exorcist that set him on the path of all things strange but in Mexico he had a weird experience that confirmed his path to find out more.

As he climbed one of the majestic Aztec pyramids dedicated to the Maya god of storm, he approached the top as thunder clouds approached and an almighty storm broke out…Later when he visited the souvenir shop he dropped one of the hematite statuettes of a Maya god.
While picking up the shattered pieces he cut himself quite badly and the wound wouldn’t stop bleeding. A collegaue gave him a book on the history of the pyramids and in it there was a vivid description of how the Maya people used to kill their victims….

They’d carry them to the top of the pyramid, tie them up, invoke the god of storm and slash them with stone attached to long poles – creating just the same kind of wound that he had received from the haematite statue!

Mike currently works in the BBC national Newsroom in London where he writes and produces news summaries for Radio 2, 3, 4 and the BBC’s network of 39 local radio stations. He also reads the news for Radio 2 and 6 Music in London and Radio 5 Live in Salford. He’s a passionate Ambassador for the James Whale Fund for Kidney Cancer. 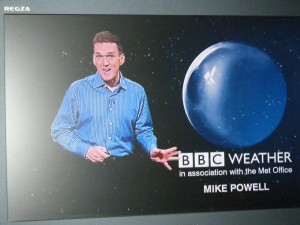